Evolution of the 1987 Ford Ranger

Introducing the Ford Ranger: past models

In 1972, Ford owned a 7% stake in Mazda. Once Ford acquired more stakes, they introduced the Ford Ranger as a replacement for the Courier in 1982. The Ranger was nearly the same size as the Courier and offered 6 and 7 foot beds. It was available with both a V-6 or 4-cylinder diesel engine. According to therangerstation.com, it became available with four-wheel drive later in the model year and the base Ranger had the 2-liter inline 4-cylinder engine rated at 72 hp. The first Ranger was priced at just $6,203. Adjusted for inflation, that would be $16,570.

The 1984 Ford Ranger’s styling remained unchanged. Shortly after, they introduced the more upscale Ranger S model that was a very stripped down version. After that, the 1985 Ford Ranger was a fuel-injected 2.3-liter four-cylinder engine that was more powerful than the carbureted version it replaced. A carbureted 2.8-liter V-6 remained optional, and newly available was a four-speed automatic transmission. The 5-speed manual transmission became standard, replacing the 4-speed manual. Ford continued to stress that the Ranger was a small scale version of the F-150. The 1986 Ranger offered a standard cab and a new Super Cab. Under the hood, the Ranger lineup had electronic fuel injection. It also offered a 2.4-liter inline 4-cylinder. 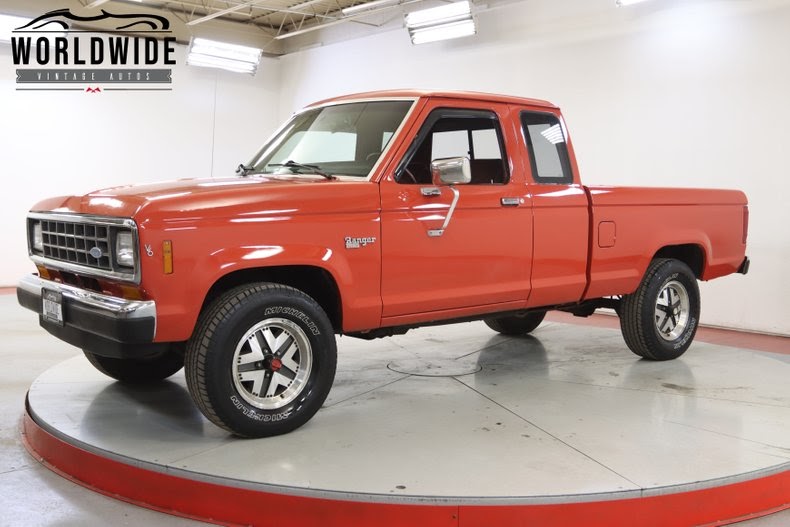 Now onto the 1987 Ford Ranger. A new 4x4 model was introduced called the High Rider STX that included a bed-mounted light bar and tubular grille guard. According to therangerstation.com, it had 1.5 inches more ground clearance than the previous year’s 4×4 model. Other changes included dropping the 2.3-liter on the SuperCab for the larger 2.9-liter V-6. New white painted wheels were an option on some trucks and all the radios had an electronic display, which also included a clock, as standard.

This model of the Ranger came with a 2.9L V6. Its five-speed manual transition was manufactured by Toyo Kogyo and sport bucket seats, which was its most performance-oriented detail. By 1987 the Ranger soared with options that included sway bars, bucket seats, a back window that could slide open, and more.

Evolving beyond the 1987 Ford Ranger

After 1987, the Ford Ranger was redesigned featuring the bumper shape and fog lamps that were most commonly being seen on the roads. In 1993, this model had rounded edges and a smaller grille in an attempt to be more fuel efficient. Between 1998-2002 the Ranger was produced in electric models to compete with the Chevy’s electric S10-EV Electric Truck. Sadly, this didn’t last long and only about 400 electric Rangers remain today.

From 2002 until 2008 the Ford Ranger increased its size to increase comfort and visibility. It was marketed as an off-roading truck. However, sales gradually declined and in 2008 the Ford Ranger was discontinued. Consumers missed the Ford Ranger and it was eventually brought back in 2019. Today, it is considered more of a mid size truck than a compact model. The 2019 and 2020 Ford Ranger models aren’t that much smaller than the Ford 150.

To check out our Ford Ranger collection, click here and see for yourself how awesome these models are. Worldwide Vintage Autos has you covered when it comes to your classic car needs. With our attentive and hard working staff, we promise to deliver an enjoyable and personal experience. We love making our customers happy by matching them up with their dream cars! Worldwide Vintage Autos looks forward to working with you soon.